PROTECTOR 2: Responding to the Needs of the Australian Defence Force. 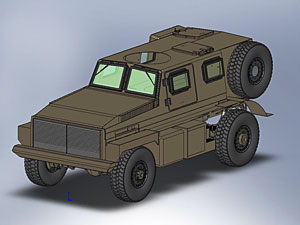 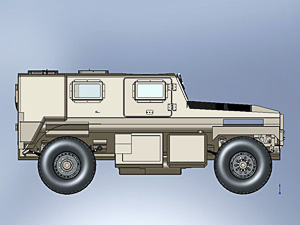 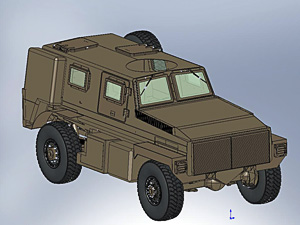 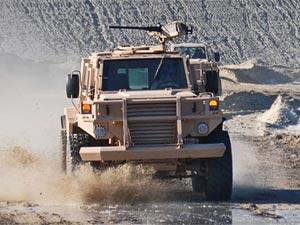 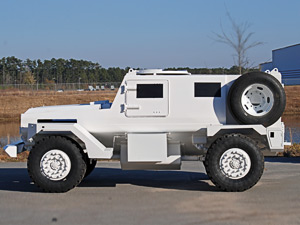 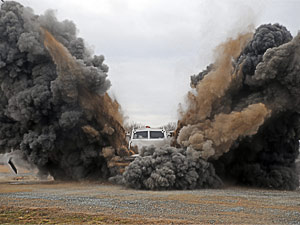 In September 2009 PTS lodged a multi-product response to the Australian Defence Force [ADF] Request for Proposals: Land 121Ph4 01/09. The ADF's innovative Statement of Requirements proposed a vehicle light enough to be deployed off-road, on deserts and mountain tracks; transportable by helicopter, while providing high levels of soldier survivability through ballistic and blast protection.

In 2008 Koos de Wet identified a US product, the Protector 1 that could be redeveloped to more than meet the emerging needs of the ADF. Work commenced to redesign the armour and Australianise the vehicle in capability and compliance. PTS acquired the license for the Australian manufacture, the joint product development with Mobile Armoured Vehicles LLC [MAV] of South Carolina also continued with the needs of other potential global customers included in the design. The hull design progressed ready for blast testing and the pre-cursor vehicle platform, the Protector 1 continued to test the driveline and suspension to confirm stability, grade ability, off-road performance and reliability covering more than 40,000 Klm by November 2009.

During the joint development in the US, in Australia manufacturing processes were reviewed and local component supply capability was assessed for vehicle production. This established scheduling and cost estimates for the PTS response to the RFP. The proposal offers local [Australian] content significantly in excess of the level specified by the ADF.

Manufacturing a blast resistant vehicle in Queensland would involve the systematic acquisition of contractors, material, components and services to form an integrated supply chain. Sourcing would be Australia wide and would tap into Queensland's established defence and transport manufacturing capability, potentially generating purchases and contracts worth more than $1 billion and 250 Toowoomba manufacturing jobs over 5 years.

Operationally it is intended that there will be a Project Manager in the licensor, a Project Manager in PTS and a Project Manager embedded in GWM with a project team to control quality certification; the data flow to Defence; the supply line data and control to minimize working capital requirements. Within GWM the manufacturing would continue to operate effectively while the embedded project team would deal with Defence issues and provide the extra resources required by a defence contract.

The review of manufacturing capacities established that the prototyping should be by PTS sub-contract in the US where there is the MAV design team; available factory capacity; specialist personnel; and established supply lines. This would enable the timely and cost effective completion of the short term, high-activity prototyping process under the control of PTS, fast tracked, avoiding start-up and supply delays.

Protected Transport Systems Pty Ltd [PTS], submitted a response to the RFP Land 121 PH4 01/09 in 29 September 2009 to supply 1,300 light armoured vehicles to the Australian Defence Force [ADF]. All participants have recently been advised that the decision wether or not to proceed with an Australian manufacturer is now expected to be announced in June 2010. But Government may instead choose to be supplied via the American JVLT program (See: Top Marine asks: Is JLTV worth buying? [Reuters story Dec 15, 2009. 50KB PDF]) or not proceed at all.

The offered specification has been confirmed. Development and testing is nearing completion with the current schedule to a build prototype 6-man command variant by the end of March 2010.

The hull shape, material, welding processes and manufacturing processes have ensured the heaviest variant will not exceed 7,000 kg in its empty condition with STANAG level 2 (plus) blast protection and the ballistic protection level as detailed in our Response.

Air conditioning and seating are similar to the standard of the Bushmaster which enables the occupants to comfortably wear body armour.

Improvements have been incorporated into the wheel wells and engine bay to accommodate increased wheel movement; the cooling system has been further optimized for hot and high operation under dusty conditions and the powerpack [radiator, engine, gearbox, battery and reserve fuel unit] has been further simplified and unitized for easier field removal and replacement. The powerpack is the basis of effective in-service support system and can be run on an external stand.

Essentially PTS has now verified the performance offered in the Response and is confident that it is able to expeditiously prototype and manufacture vehicles that meet or exceed the offered performance and also provide for increased payload with options for seating a total of 8 people, and the capability to uparmour in field to increase ballistic protection.

The welded steels have been successfully ballistically tested and exceed the required level.

Two special blast test hulls were built for blast protection test purposes. The first test confirmed the conservative position in the Response of meeting STANAG L2 as a minimum.

The centre blast under the transfer case housing (most vulnerable part of the vehicle) was conducted on January 28, 2010 at the Aberdeen test ground by ATC using a 15lb charge of TNT (6.8kg) instead of the lower 6kg charge specified in STANAG 4569 for a level 2b blast which it passed well with low internal overpressures and shock loads recorded on the hybrid 111 dummies.

An internal overpressure of only 2.3 psi was recorded during the blast and the front of the vehicle lifted only 2 ft vertically during the blast. Hull deformation was minimal and there were no hull or transfer case cover breaches nor did any shrapnel enter the crew compartment and the two test dummies recorded no potentially serious injuries. One US military observer noticed and remarked that it appeared that the vehicle would still be driveable after that level of blast.

Since PTS believes the Protector 2 is capable of protecting the occupants against even more powerful blasts, additional blast tests are scheduled.

The design data packs, supply chain, manufacturing processes and jigs have been developed.

This provides for close control, flexibility of response and Australian content exceeding 80%.

Australian purchases for material, components, labour, and services will exceed $1 billion. Direct employment, primarily in Toowoomba, is assessed at 250 people for 5 years.

Steel from Australian steelworks, armoured glass, seats and vehicle components actually manufactured in Australia are preferred. This provides for a high Australian economic value add for the Protector 2 as well as a high level of Local Content.